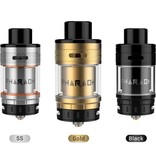 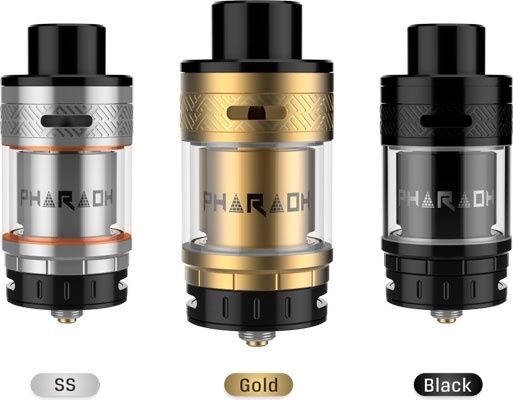 The Pharaoh RTA is the next atomizer designed by the world famous RiP Trippers in conjunction with Digiflavor, presenting a robust and dynamic atomizer platform that is designed to be a modular system that allows for interchangeable decks (sold separately), the expansion of the juice reservoir, and an extraordinarily versatile dual airflow system. Measuring 25mm at it's base and expanding to 27mm at the widest point, the Pharaoh RTA's chassis features a streamlined design language with soft knurling at the top airflow system for added convenience. In standard configuration, the Pharaoh features a tank capacity of 4.6 milliliters and, when installed with the included expansion tube, can be expanded an additional 3 milliliters in capacity. The Pharaoh RTA's build deck features a two post spring loaded clamp style configuration primarily intended for single coil configurations, allowing for organic coil placement while maximizing the 7mm by 4mm airslot located centrally within the deck. The Pharaoh RTA features one of the most dynamic airflow systems available today, with two independently adjustable airflow systems located at the top and at the bottom of the chassis. Each system can be adjusted and used in tandem or run independently from one another depending on user preference. The top airflow system features dual 2mm diameter airholes that lead directly down into the build chamber, providing smooth and direct airflow. The bottom airflow system features dual 15mm by 2mm airslots that utilizes a click to set system with five different airflow settings ranging from fully open to fully closed. Offering one of the best and most complete systems presented, the RiP Trippers Pharaoh RTA enters the market as the most feature packed RTA available today.